What really is going on with a coincidence?  I mean…isn’t it kind of weird when they actually occur?

co-in-ci-dence:  a striking occurrence of two or more events at one time apparently by mere chance.

Yesterday, my daughter, a friend of hers and I went to our local mall.  While the two of them went for a quick walk around the building, I decided to duck into the food court and dig into a sandwich from Subway.  A very tall, young man walks up to me.  “Ms. Barker.  It’s me, Jack.”

“Wow…Jack.  How are ya buddy?  I haven’t seen you for years!”  We chat for a good ten minutes just catching up with each other.

He and my son were close friends in elementary school. This in and of itself isn’t all that big a deal. What makes it feel like a bigger deal than just his walking up, was the fact that my son and I had talked about Jack earlier in the day.

“Have you seen Jack?  I asked Hank.

“I haven’t seen him since fifth grade, Mom,” Hank replied.

We spoke for a moment about where my son thought he went to school, but in fact, we weren’t sure because we had not seen him since he was ten years old.

Jack is now 16 and I saw him on the very day that my son and I had wandered onto wondering about him.

Sure…I guess I can chalk it up to coincidence, but these random junctions seem to happen more often then not.

Which brings me around to Caitlin Boyle. She is an amazing woman who has built her entire career on what appear to be coincidences.

Caitlin Boyle is the founder of Operation Beautiful. She moved to Charlotte (coincidence or not?) about a year ago and we have become very, very close.

“I began Operation Beautiful by leaving positive messages on the mirrors of public restrooms — at work, at the gym, at the grocery store.  I scribble down whatever comes to mind — “You are beautiful!” or “You are amazing just the way you are!”  My personal goal is to leave as many Operation Beautiful notes as I can. Maybe some people read them and just smile, but I bet some people are truly touched by the effort of a random stranger. 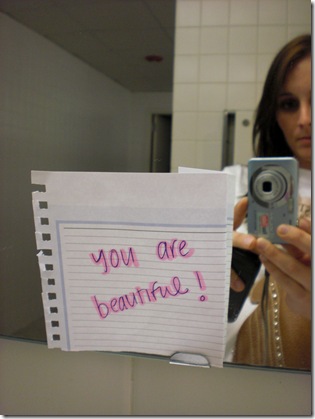 This all started for Caitlin on “one of those days” when nothing seemed to be going right.  She decided that posting a sticky note with positive words on the mirror of a random restroom might cheer HER up.  And so she did.

Since then literally tens of thousands of people have participated in Operation Beautiful. Caitlin has actually written a book documenting the transformations experienced through the discovery of a randomly placed note, coincidentally found by someone in need of that note with that message on that day.  Young women struggling with anorexia, bulimia and other challenging body-image/self-esteem issues have literally been saved due to the coincidental discovery of these positive notes found on random bathroom mirrors, fitness center scales, health club dressing rooms and grocery store diet food shelves.

I simply cannot, or more preferably choose not to attribute these “junctions” between two people as random or coincidental, but rather prefer to think of them as mysterious and gentle nudges from the Universe/God/Love, that something bigger is at work out there, conspiring in our favor…if we would just open our eyes to Him/Her/It.  Today I’m going to look at each encounter, whether chance or not, as an opportunity to honor the mysterious possibility that maybe…just maybe…there is a reason for the encounter that goes beyond what is obvious.

What do you think “coincidences” are about?  Have you got a story of a coincidental meeting that may suggest something more mysterious, beautiful and inspiring is at work in your life?

…(And now an addendum added approximately four hours since I posted everything above.  I got into my car after writing this original post…checked my phone and found a text message from our Girls on the Run director, Cissy Fish, in Hickory, North Carolina.  She had NOT read this blog.

The content of her text which had no words but only an image was what follows:

Pretty cool, uh?  Talk about coincidences?  Is it?  Share your story or your thoughts in the comment section.  Wow.