His voice was loud and sheer and terrifying. “Why’d you shoot him? Why’d you kill him? This keeps happening and what do you get? You get vacation time. Nice life. You kill a brother and you get a few days off! How would you feel if all your brothers and fathers were lying dead in the streets at the hands of cops?”

The officer stood there, with eyes open, his hands resting gently by his side. His heart open.

There is a pause.

“It is heartbreaking. It’s heart breaking. It would be traumatizing. I am here too and want the killing to stop.”

There is another pause.

The officer hands the angry young man his card…”I think we can do something about that. Let’s have coffee or a meal together.”

The young man takes the card. And joins back up with his friends at the protest.

Last night, Ann Davant Crehore, Julia Dorn and I (as part of The Red Boot Coalition) had the honor (and when I say honor…I mean honor) of leading and participating in a 7 hour workshop with 25 CMPD officers on the power of listening, empathy and compassion.

Those of you who are prone to cynicism, I get it. I can be cynical too. But as I sat in that opening circle and heard one officer after another, share deeply and passionately about his/her work and the death and dying happening throughout the country, I realized that we were in for a powerful night.

Major Mike Campagna is a game-changer and creator of the Constructive Conversations Team. There is no other initiative like it in the country. Forty-five police officers have volunteered to be on the CCT…they will be deployed into neighborhoods, hot situations and crime scenes to suspend their own judgements and agendas and listen instead…listen to the anger, fear and frustration of those most impacted by the institutional “isms” in the justice system.

Mike shared why this matters to him. “Really listening builds bridges and opens the door for future impact. It might not happen right away. But overtime…listening builds trust and trust opens people to connection…something that as dramatic as it may sound…literally saves lives.”

For nearly three and a half hours, community members hurled their anger, frustration and fear at the officers in a series of exercises designed to challenge them into utilizing their listening skills to get to the root of all that swirling and painful anger.

“I hear your anger. I want to understand. Tell me more.”

It wasn’t all unicorns and glitter. Some officers were noticeably upset; and the energy it took for the community members to bring forth their frustration and anger over and over for the different scenes was definitely exhausting.

But at the end when everyone…the officers, the community members, the observers (Elaine Cohoon Miller and Holly Adkisson were there to help evaluate the officer’s response) came together to debrief the experience, I realized that the experience alone had changed things.

We saw each other as human beings. Greg Jackson and Antuan Smith, co-founders of the Charlotte Community Coalition were there. Greg met Major Campagna during the protests. These guys are angry and joyful and ready to move the needle forward. We plan to meet up next week. I fell madly in love with their passion, vision and willingness to “overcome by coming over.”

There is a lot of unrest and division throughout our country…today in particular marks a changing of the guard…and while there is much to consider and yes much to fear…this woman, the one who writes you now…has a heart full of hope and wonder and belief in the good…because last night I saw it with my own two eyes, heard it with my own two ears, and felt it with my heart.

There is a change a’coming and I plan to be a part of it. 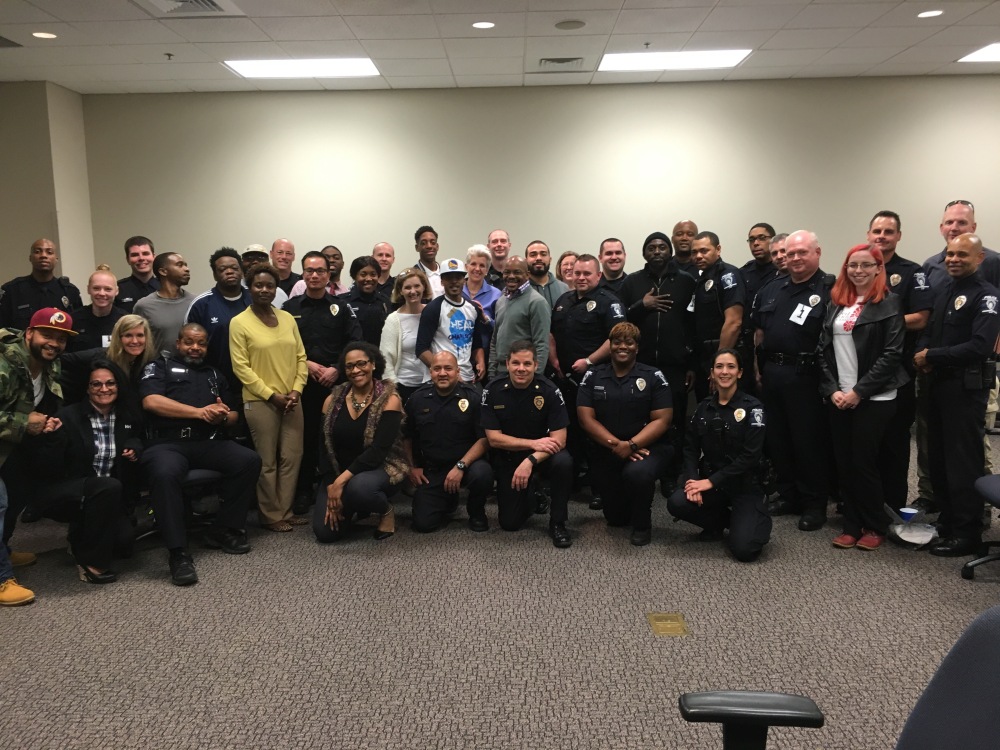 One thought on “A Change A’Comin’”