Skip to content
Posted on July 1, 2014July 1, 2014 by wanderingthroughnothingness

The impact of today will not settle within these bones o’ mine for weeks. But I didn’t want this day to end without at least sharing something about one of the most powerful days of my life.

Today I had the opportunity…no wait a minute…I had the PRIVILEGE to speak with fifteen 16 to 18 year old girls. These brave girls traveled anywhere from 3 to 5 hours to be at the workshop. They hail from some of Poland’s poorest communities and frankly…these girls know poverty in ways that I have only read about in books.

The media was there in full force. Two newspapers including the Warsaw Times (their version of the New York Times) and Good Morning Poland…their version of…Good Morning America were all present. This was a surprise to me. Workshops such as this occur frequently in the US and are certainly not covered by such intense media. 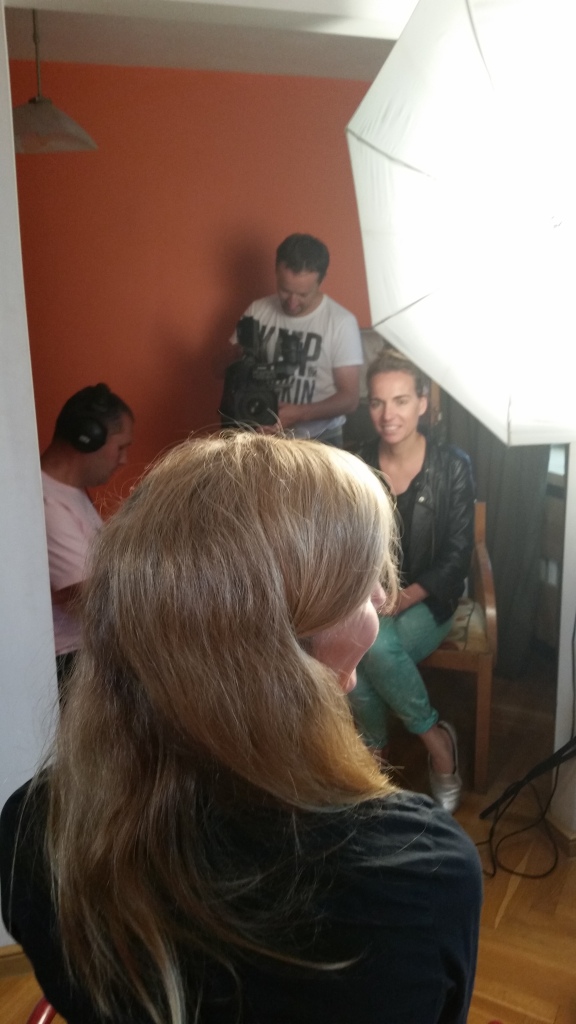 I began with a humorous and poignant story about my own daughter Helen and then moved into some very simple introductions.

Next. I told my story…the story of founding Girls on the Run. I introduced them to the concept of the Girl Box, but now (as opposed to how I discussed it in the early days) I suggested that there is also a boy box, a leader box, a mother box, a professional athlete box, a celebrity box. Heck there is a cultural box we use to define just about everything in our lives. This in and of itself isn’t a bad or good thing…it’s a way we humans bring order to our physical environment. It is easier…it allows us to make sense of a world that at times can be overwhelming.

Gender is just one of those boxes and when I was a young girl, trying to make my way from childhood into adulthood, GENDER was the box I spent most of my time trying to figure out and make sense for myself. I mean after all, gender is a pretty obvious box, first because usually we can just look at someone and immediately size them up by their gender. (Others may struggle with other boxes that define us: ethnicity, economics, religion or political party.) Mine, though was all about GIRL.

I shared a little bit of this concept with them and then we listed off some of the messages that come from the “Girl Box” as they know it.

“Women should be married and stay at home with their children.”
“Women should remain quiet and if they speak up they should be careful because it is very likely they will be seen as aggressive or unattractive.”
“Women are discouraged from pursuing professional careers.”
“Women who are divorced are not respected.”

I then went on to suggest that my experience has been…that the most effective way to eliminate the negative side of these “boxes” that confine us is to shift our focus from the box and focus on who we are and bring THAT into the world…bring those traits into our reality. Start there, in small ways first and then when we are ready, go for it a little more boldy.

I asked for a volunteer. One brave young woman stepped up.
I asked her to wiggle her index finger…in a “come here” kind of way.

I then asked her if she could possibly do that funny gesture any “bigger.”

She added her whole hand to the movement.

“I think she can bring even more of herself into this…Do you?”

The girls all laughed. “Yes! Yes!”

Eventually Shaka was pretty much doing a disco dance, arms moving, feet moving and a booty shake that was absolutely stellar…all the while that finger doing it’s thang.

The girls clapped for her.

“So imagine that this (signaling the come here gesture) is a talent that you have…something you do really well and that you really enjoy.

Do you want to do that just a little bit? Heck no! The world needs and yearns for your talents. Focus there! Bring them on. Utilize your talents. Start small if you must or if you want, but know that the more you bring your attention to your talents, the more the Girl Box slips away.”

I then asked the group to share some of their talents. Only two girls responded…

I asked for a second volunteer.

I whispered to her what her assignment would be. “Whisper your name.”

So, on the count of three, Patricia whispered, “Patricia” to the room full of girls.
“I’m not sure everyone heard you,” I kidded her. “Could you do that a little bit louder?”

“Ahhh,” I said. “I’ll bet you can do that even louder. Give it a shot, girl!”
Patricia stated her name.

Slowly but surely, Patricia’s voice grew…and with a final count of three by all of her friends, Patricia yelled her name as loud as you can imagine!

I asked the girls. “What did Patricia have to use for you to hear her name.”

One of the girls responded quickly and quite enthusiastically. “Her voice.”

“Right,” I clapped. “Her voice! It’s so very important to share our voice…to find one soul sister…you know…that one heart friend…that girlfriend with whom you can be your biggest, brightest, boldest and most vulnerable self. To begin there…to practice being your true and honest self with her and once you’ve found her and you are both certain of your voice, invite another girl into your circle. Listen, share, be! Invite another and another…and before you know it, the Girl Box in your world has completely disappeared.”

They Looked at me with an eager yearning…eyes wide…hearts open.

“I need one more volunteer.”

Not sure what was next, the girls were hesitant to volunteer. Everyone smiled…a few giggled.

I chose Veronica. She and I had talked before the workshop had begun.

I whispered to Veronica her assignment.

And on the count of three, she began.

Tall, full of the brightest light you can imagine, Veronica stood there, with her doe-like, brilliant blue eyes and a smile that was authentic not only because of its joy, but the bitter and often sad hardships tucked in beneath the corners there on her beautiful, hopeful face.

She stood there, tall, wise and vulnerable for all of her friends to see.

“What do you think Veronica is doing?” I asked the group.

“Yes,” I said. She is definitely standing, but that’s not what I asked her to do.
“Smiling,” another said.

“Yep…but not what I’m looking for.”

“Being herself,” Patricia shouted, the joy singing out from under the space between her words

“Think about it.” I said. “There are hundreds of thousands, maybe millions of Veronicas in the world, but is there one Veronica in all the world who is this one?”

“I mean think about that. There are trillions and trillions of possible combinations and this Veronica, got this body, this smile, this light, this spirit, this awesome, fantastic combination of so many amazing traits and cells and emotions and all of these we call VERONICA. Think about that!!! Like really. This rare and wonderful combination could not possibly be by accident. YOU, ME, all of us were put together in such a way that the world celebrates, rejoices…yearns for what and who we are. How we ended up simply, at least the way I see it, cannot be a coincidence. It’s too perfect! “in fact it is so unique and perfect that no box can contain it!!!”

“So, let’s talk a bit. Does anybody have any questions, thoughts, remarks they would like to share?”

The room was dead silent. NOT the usual response I get when I am working with girls in the United States.

“Anything? Any impressions? What do you think about what I’ve shared here today?”

“I can sit with this…it’s uncomfortable, but it’s okay. Sometimes our silence says as much as our words.”

We sat there together in the room for what felt like a very, very long time.

Every eye in the room was looking at me. Every face directed toward me. Every heart open, spirit willing, soul present and yet…no words.

And then it hit me, as it hits me again all over now as I write.

No one…no one had ever spoken such as this to these girls. Not because they didn’t feel it or know it or believe it…but because the words, THESE words, had just never been said.

This doesn’t make it right or wrong or good or bad; but I realized in that moment that words can be our way out of the box, as powerfully as they can be the way in…that the words we choose to use can contain us or set us free. 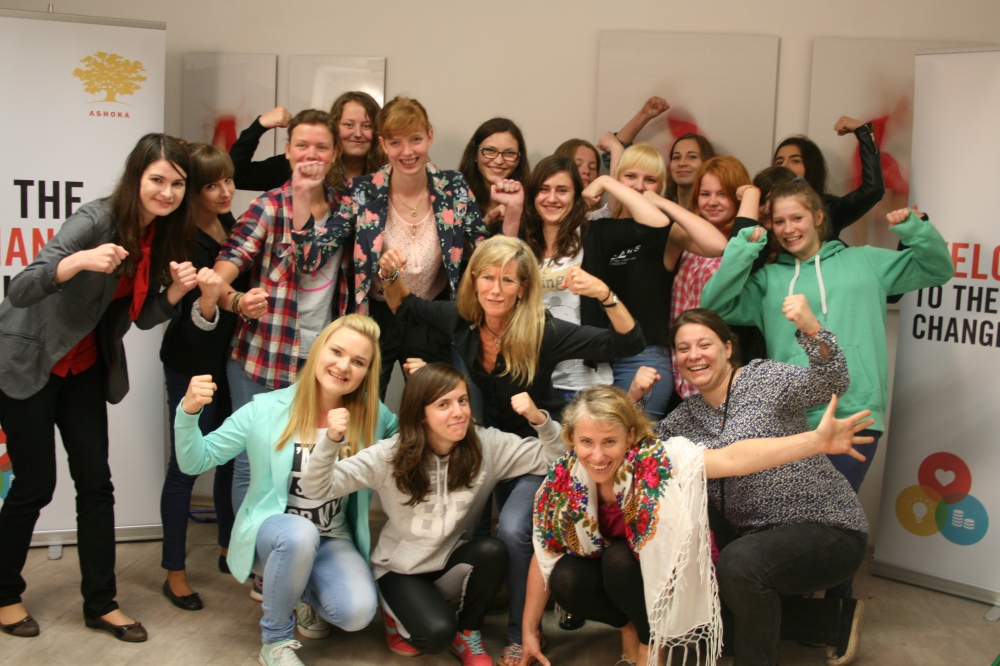